INCLUSION WITH NO PRIORITIES

LGBT People and The Bible 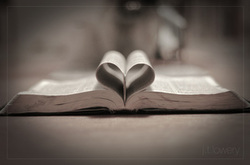 LGBT people face discrimination because of social attitudes. Unfortunately, these attitudes are often taught by churches and, sadly, the Bible is frequently used as a weapon to “bash” lesbians and gays. It is important to remember that such hurtful things are not a reflection of Christ, or the way God wants the church to be, or even what the Bible really says.

Only a small number of passages in the entire Bible refer to same-sex sexual activity (in just six out of sixty-six books of the whole Bible).  Only one relates to women! Obviously this topic was not of great concern to the biblical writers.

What are these passages?

The passage that is most famously mis-used is the story of Sodom and Gomorrah (Genesis chapter 19). Two angels, disguised as visitors, visit the city of Sodom, to find Lot, a Jewish inhabitant of the city. The men of Sodom want to ‘know’ (yadah - a Hebrew word that can mean sexual intercourse) the foreigners who have come to Lot’s house.  In essence they want to rape them in order to show their social and cultural dominance over them – a pattern of sexual behaviour that was common at that time.

This story is not a condemnation of homosexuality, but is a story about rape and inhospitality.  In other biblical texts (Ezekiel 16:49, Luke 17:28-29) Sodom’s ‘sin’ is not identified as homosexuality, rather, the sins were pride, failure to help the poor, and lack of hospitality to foreigners. Hospitality was a very important part of this culture and the men of Sodom violated this value.

Another Old Testament passage that is frequently misunderstood is from the Book of Leviticus. Leviticus is a book of laws and is still observed today by Orthodox Jews.

If a man lies with a male as with a woman, both of them have committed an abomination; they shall be put to death; their blood is upon them. (Lev. 20:13)

There are two important things to remember when reading these quotations:

1. Leviticus is a law book, written hundreds of years ago. Christians who quote these two laws do not generally follow the rest of the laws in Leviticus – such as not cutting men’s hair, not eating shellfish or wearing clothes made of mixed fibres! The laws were written to help the people of Israel keep themselves pure and separate from surrounding cultures. Showing dominance over other Jewish men by having sex with them was one of the practices to be avoided.

2. This is not the description of a loving, same-sex relationship as we know it today.

What about in the New Testament?

The apostle Paul wrote letters to the new Christian communities that began to develop around the Mediterranean after Jesus’ death and resurrection. In these letters, Paul is often giving advice to these new Christians, especially encouraging them to live in a new way, which is different from the cultures and customs around them.

In some of these places, it may have been that men would have sex with shrine prostitutes as part of their pagan worship. In Greek culture, it was common for an older man to take an interest in a younger boy, to socialize and educate them. These relationships were also sometimes sexual in nature.

The law is laid down not for the innocent but for the lawless and disobedient, for the godless and sinful, for the unholy and profane, for those who kill their father or mother, for murderers, fornicators, sodomites, slave traders, liars, perjurers, and whatever else is contrary to the sound teaching that conforms to the glorious gospel of the blessed God  (1 Timothy 1:9-11).

These Greek words are difficult to translate in the context of these passages.  Malakoi is a common term and means “soft.” It can refer to clothing (as in Matthew 11:8) or moral matters, meaning “undisciplined.”

Arsenokoitai is a rare word and is made up of arseno meaning “man,” and koitai meaning “bed, lying, or having sex with.”  When put together the word may mean “male prostitutes.”

The reality is that no-one really knows what behaviour Paul was describing in his letters.

The only passage that seems to mention passion between women!

For this reason God gave them up to degrading passions. Their women exchanged natural intercourse for unnatural, and in the same way also the men, giving up natural intercourse with women, were consumed with passion for one another. Men committed shameless acts with men and received in their own persons the due penalty for their error. (Romans 1: 26-27)

Again, Paul’s meaning here is uncertain. The Revised Standard Version of the Bible, published by Oxford University Press, suggests that Paul was condemning excessive sexuality activity, rather sexual orientation. Other scholars see this as part of trying to keep the new Christians separate from the cultures and practices around them at the time.

Again, we don’t really know what Paul was trying to say.

Did Jesus ever say anything about being lesbian or gay?

No he didn’t – although he did talk a lot about love, about justice and about not condemning others!

We currently meet online for Worship every Sunday from 5pm to 6pm.

We will be online after worship for conversation, socialising and discussions. Please feel free to stick around once the service finishes!

We're listed on the

Get social with us.